With its 68th edition, the Monaco Red Cross Gala happens to be one of the oldest fundraisers in the world. Inaugurated in 1948 by the young and handsome Prince Rainier III of Monaco, the purpose of this unique and extravagant event is to raise awareness and funds for the several humanitarian efforts taken on board by the Monaco Red Cross. Few of the social activities performed by the Monaco Red Cross include providing first aid, hospital assistance, help for the elderly and poor and nurse facility.

Since its initiation, the Monaco Red Cross Gala has seen its stage lightened by several star performers. From Maurice Chevalier in 1948 to Gilbert Bacaud in 1968, from Elton John in 1984 to Lionel Richie in 2004, some of the most charismatic and prominent artists have sparked their magic at the Gala. Since 1989 the creative art of several artists have been put on display for subsequent purchase. Moretti, Cesar, Barni and Valdez are few of the famous ones that have seen their work get applauded at the Gala. To mark the event off, there is a lottery drawing occasion as well just to liven up the night.The Gala has seen itself grow exponentially since it moved to its present location, the Monte Carlo Sporting Club where the red carpet is rolled on every year.

Last Saturday the stage was set for another Monaco Red Cross Gala at the Monte Carlo Sporting Club, on a star studded evening. The show was stolen by the glamorous Princess Charlene of Monaco. The 38 year old Zimbabwean born wife of Prince Albert II wore a stunning Armani Prive dreamy purple and blue gown with drop diamond earrings and a silver clutch. Princess Charlene looked like a dream dressed in that blue and purplish gown that can be termed an Armani classic. It was Armani signature style that is so popular on the Red carpet. It complimented her complexion very well and added to her already established sense of style and elegance. 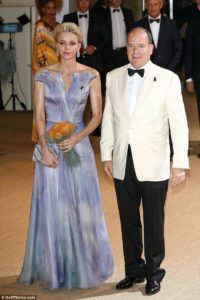 This dress is made of the material most have seen before in Spring 2016 couture Collection. The pleats on the gown gives it the perfect ruffle needed for something as auspicious as the Red carpet. The purple and blue color is just the contrast Armani is famous for as it stands out brilliantly against the red carpet. The Spring Collection is far more ostentatious and compared to that, this dress is an understated version. It is simple yet elegant and definitely modern yet highly feminine. This dress would work best for any formal event including charity balls and dinners. Princess Charlene knew just how to accessorize the dress with a silver cultch and pearls. The accessories gave it just the right touch to highlight the mermaid theme of the dress.